Things that went growl in the night

A kind-of sequel to a previous post: Things that go growl in the night


There is something satisfactory in returning to a wild place that you know well, a place beyond your everyday life, yet that is familiar because it holds a piece of your own history. If you are drawn back to such places, for whatever reasons, you may find that the combination of their wildness, their beauty and their familiarity invites you both backwards and forwards into your life in a mix that is compelling.

Yellowwood is such a place for me, a place that is within the geographical proximity of my everyday experience and yet far beyond it. Today the higher ground, everything above the foot slopes, is hidden in a cloud that has been stripped away from the plains over which I drove this morning, but still shrouds these mountains.

I have set out later than I planned to and alone. None of the friends I called to join me were free. I soon leave behind the thin line of highway with its verge of weeds and cast aside broken, plastic bits of civilization. The ingrained memory of pushing wearily through a tangle of rocks and fynbos, late in a long cycle of intense effort, makes me, on these occasions, want to perfect a line of least resistance through here. And to channel those who will follow into a single path, for both their own individual ease and, over time, to contribute to a communal ease. A shared path in these places makes for much easier passage.

My Swiss mountain friend, Jurgen says that the fynbos is not fyn bos at all. It is rofbos. Rof it is indeed, in character and underfoot. It makes the Western Cape mountains an unruly and unkempt distant kin of the alpine meadows of Jurgen's childhood. And yet he loves them, delights in those kind of trips that I tend to feel are best appreciated in retrospect. When the entangling scratchiness of impossibly slow progress is forgotten and only the glow of it remains. But when you realise that someone else is thriving in what you have presumed is universally experienced as horrible, it can transform your experience. And so I wonder about this desire to channel a communal passage and what drives it. Should I be attempting to influence the experience of those that choose to come here, to alter in any way what is?

When I make cairns I try to combine a consciousness of the cairns themselves as well as the path that they mark. I try to make them beautiful, to achieve an aesthetic and stable balance, not merely a jumble of strewn stones. And for that I use flat stones in a single pile, turned and sequenced to balance best. But it is an art that must be performed quickly for it is done on the move. Too much pondering, too much trial and error spoils it. It is an art that must trust the first thought from the options that present: the choice of stone, weighed and touched fleetingly, of sequence. This way or that way up?

Invariably some work better than others. Gravity is an objective judge whose harsh and weighty appraisal has shaped this entire mountain. And yet it troubles to judge each of my small cairns carefully and equally. I pass previous cairns of mine that have been harshly judged and sweep the remaining rubble aside or build them anew. Perhaps a different possibility presents itself.

Up near the cloud base it is muggy, although the wind cools. The first sips from my camel pack, those that come from the exposed length of pipe over my shoulder, are cool. But those that follow are warmed from the exertion through my back. It is always steeper than I expect, and further. I take small sips of coolness. 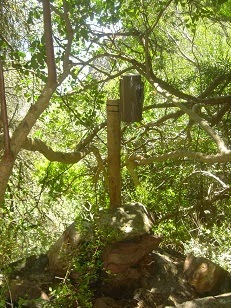 The spot where the camera stands is a quiet place, a place where the cliffs on the side of the gorge run up against the scree forest of its base. All who pass here, I hope, will take this narrow passage, regardless of any cairns that mark it. The spot is also a natural pause on an ascent or descent of this gorge. Several times I have dropped my pack and rested here amongst the trees with my back against the cool rock.

I have no way of knowing what the camera has seen until I get home and put the memory card in my computer. It is a little like the delayed gratification of the pre-digital film era. It feels appropriate to this place. There is a pleasure in knowing that not everything is available, always, and everywhere.

Before I leave, I spend time fiddling with the camera, moving it slightly left, securing it. Wondering what might have passed. Hoping. There are fresh scratches on the tree. I wonder how the timing of them has corresponded to the battery life of the camera.

It is evening when I return home. Friends are having drinks in our garden. It is good to sit, to feel the physicality of what I have done, in my legs, the rofbos scratches on my skin. I am not in a hurry to look at the pictures. Last time they had been disappointing and I am expecting the same, somehow. But later Sebastian asks for the disk and we all drift inside and gather around my laptop once he slips it in.

One of the first pictures is of a genet. “Oh cool”, the kids exclaim. Then a few birds.

There is a synchronous exhalation from all of us gathered around the computer, like from the crowd at a sports match, when the first picture of her appears. And then there is another and another. Another photo and another animal and another. There is a sense of something expanding into the space of the shared witnessing of what is being revealed on the monitor before us. Each is a revelation that goes deeper and deeper behind the two dimensionality of the screen. There is a rare and precious beauty that is close to us, but that remains hidden, that we vaguely know is there, but when we witness it, amazes us.

Later that night I take great pleasure in sending the images out to a wider audience. Like the unexpected sparkle of sunlight from a rock pool on a hot, dry day, they cannot fail to charm, to excite, to mesmerise. And I relish the play of light that comes back to me.

In the beginning of Desert Solitaire, Edward Abbey talks about surfaces in a way that makes me re-think them. The surface of things is often enough, he says. The textured patterns of lichen brought into close focus before my face on the short rock scramble below. The sharp edge of a crack cleaving a boulder. The sweeping height of the wall above, seen momentarily through swirling cloud. The supreme beauty of a leopard marking its territory in sharp scratches in the roughly textured bark of a Kershout tree. 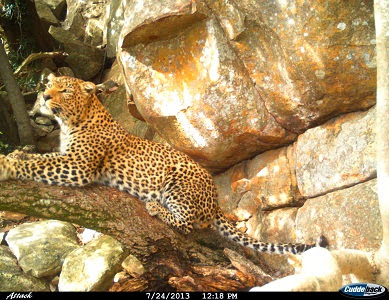 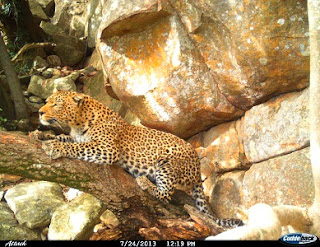 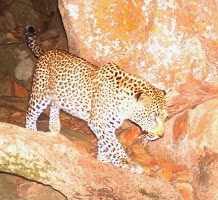 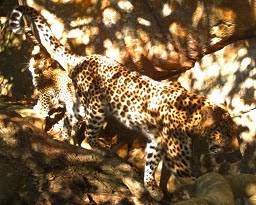 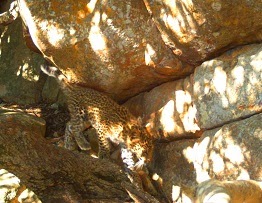 Note: the camera captured 3 different leopards, a male plus a mother and cub. For more information on these leopards have a look at: Cape Leopard Trust news
Posted by Johann Lanz at 6:00 PM