Witness to an eclipse

This article was written for the September issue of SA Mountain Magazine. 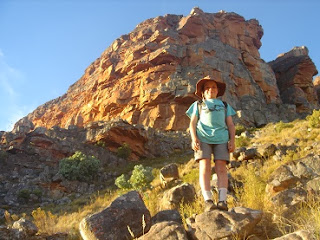 The Cederberg has the best climbing in the world. I don't know this because I've compared climbing destinations around the world. I know it because I've climbed in the Cederberg. That is enough. It is hard to imagine having a better friend than your best friend. Climbers are not objective route quality measuring devices. We are human and part of what I love about climbing is that it engages so much of my humanity. However beautiful the rock and the moves on a route, our experience of climbing it is about much more than just that. 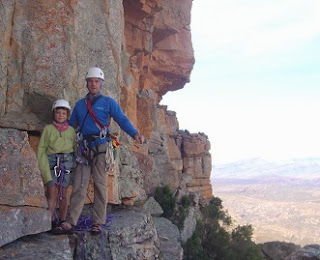 Climbing Eclipse is confirmation for me that it can't get much better. I have not climbed this route before. Now I stand below it with my son, tracing the line of its natural break up the steep, clean-cut, orange wall, towering above us. After the business of yesterday's long weekend, we are pretty much alone on the mountain today. It is silent, and up against the rock it is cold. It is the first time my son will climb anything other than a sport route. It is only the second time he will belay.

Not everyone thinks it is wise for me to be climbing up here alone with a 10 year old. But I have a strong conviction that it is. Sure, there is a risk. But there is also a risk in not being here. For that would deny Sebastian the learning opportunity of being empowered into the responsibility of risk. I want that for him. And I want to be with him as he learns it.

Two days ago we went to Sanddrif Crag so that I could get a sense of whether he is old enough yet, to belay me. Several bolts up a sport route I weight the rope, very tentatively at first. But soon I am jumping off from increasing height above the bolts, and he holds me without problem. It seems we are ready. He asks, of course, about the grade. He acknowledges, but I think can't really comprehend, my caution that a grade 13 will feel very different 6 pitches up a big, steep wall to how it feels at Silvermine Lower Crag.

There is very little chance of me falling off a route of this grade, but the imagined trauma for Sebastian if I take a serious fall makes me climb with great care. I realise as I lead us upwards, that I am placing gear not for myself but for Sebastian. I see every move from his perspective, where he will feel insecure, where he will struggle. 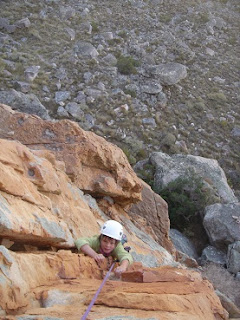 There is history here: my own, Sebastian's and a generation of climbers before us. Thirty five years ago André Schoon was making the first ascent of this route. I don't know it at the time, but amazingly he was doing it with his 11 year old son, Alistair, as part of the opening party.

Tired and elated after their day's climbing, the first ascensionists were enjoying beers around the braai fire down at the Sanddrif cottages. The night was still. The full moon rose over the river, and then to their surprise the dark shadow of an eclipse crept across it. Their new climb had its name.

If it is somewhat out there to be here today with a young child, imagine what it was like then, on a first ascent. Imagine too being the first on this wall. It is difficult from our so much more climbing developed perspective, to imagine having a cliff such as this at the exclusive disposal of your first ascensionist aspirations. You can understand why André and his climbing partner, Pete du Preez kept coming back after doing the first exploratory climb on the face, Wolf in Sheep’s Clothing, in July 1978. And why they tried to do it under a cloak of secrecy. When they saw the newspaper advert for BP fuel, showing climbers aiding through what would become known, because of it, as the BP Overhang, they thought they had lost their advantage. So they named their next climb, Day of the Jackals in anticipation of those who would arrive seeking spoils. But they still had a good time of it, and André managed a total of 13 first ascents on the south east and south west walls of Wolfberg in that year and the next. 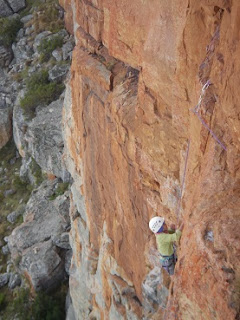 I first climbed at Wolfberg near the beginning of my climbing career more than 20 years ago. Andrew Forsyth lead me up Celestial Journey. I lead the woman, who was to become Sebastian's mother, up Little Red Rooster. Since then, I have ticked many of Wolfberg's classics with different friends, and I have grown as a climber into changing roles. Yesterday I led Arjan up Omega. He was a stranger I met the day before at the sport crag, and I could offer him his very first tradding experience. And today this.

At the end of the traverse on pitch 2, Sebastian must make a step across the void to reach me at the stance. And for the first time the exposure kicks in. Pitch 3 is superb - up a vertical wall, which drops down sheer to the distant ground below. I watch from above as Sebastian inches his way up. He stops. And then in a small, quavering voice: “I can't do it daddy”.

“We have plenty of time”, I say. “Rest on the rope a while, and then see. Focus on looking up, not down” 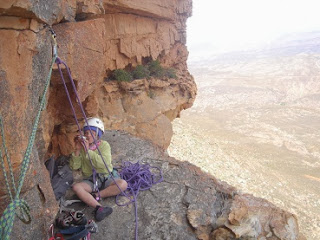 He reaches me on the ledge with relief. We sit a while, share a drink and a snack, and the camaraderie of climbing partners joined by a rope. And then he is ready to go on. There has been a shift. He has shown himself what he is capable of. There is no stopping us now.

From the big ledge above pitch 5, I can go straight up another face of hardened, orange Cederberg stone on incut jugs and out through a final overlap a meter from the top. The world is at my feet. As I revel in it, a black eagle glides along the ledge line a few meters above where Sebastian belays, passing between us. 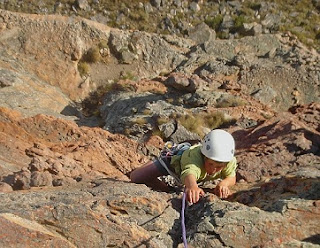 Attaining the other-wordly stone plateau on top of a Cederberg wall is always a peak moment. But being there for the first time with my son, is even more so. We linger to take it all in, coil the ropes, sort the gear. Then I lead him barefoot across the convoluted plateau, picking a line on smooth rock, between the fantastically sculpted gargoyles. 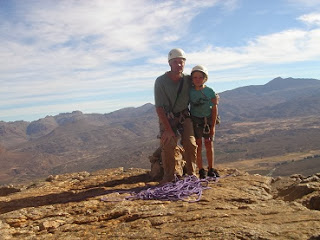 Every March, since being a parent we have made an annual pilgrimage to Sanddrif with a group of other families. Every year we do a hike through the cracks, with the next generation. Last year I took a group of the older ones, which includes Sebastian, up the first crack, the climber's crack, for the first time. This year we added the next kids in the age sequence. So Sebastian knows it well, but today is his first descent after having climbed a route on the wall. 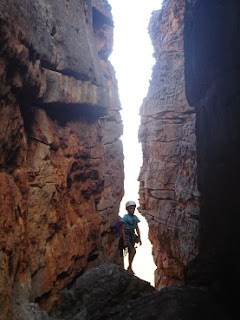 Returning to the Cederberg is always a chance to reset the balance of what matters against the less important. As I follow Sebastian down the crack, which drops deep into the heart of this mountain, I know that what really matters is that each of us is vitally alive.