On the day my father died

I am driving towards the small city of Port Elizabeth in the winter darkness. The eastern horizon, dead ahead, gradually defines itself in increasingly lighter tones of orange, outlined between the dark earth and sky. There are raindrops on the windscreen. The new glasses I am wearing define the world around me more sharply. Everything is slightly more beautiful.

This is what I am thinking: The actual world beyond the windscreen pays scant attention to the models we use to understand it, whether they are models that attempt to attribute value ratings to agricultural land, or religious models that attempt to understand the mystery of human existence. I think we believe too much in the models. But of course if we don't, we set ourselves adrift in a spinning world. And that can be uncomfortable.

I am thinking this too: the world we live in, unlike the one turning in front of me, does not revolve on an axis of fact. That is something only hardened scientists believe in. And those who believe scientists.

The intricate deep black of an electricity pylon is etched on a flaming background. In seeing sharply there is no distinction in the beauty of things. The detail of everything belongs. Even the straggly, skew pines are beautiful. 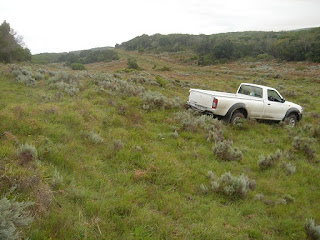 The bakkie in which I am travelling is about function, not comfort. I have needed it to take me up sandy inclines through the dense coastal bush, and along tracks thick with mud and cow dung. The cab interior is sheer, grey plastic without frills. There is no intermittent setting on the windscreen wipers. There is no radio. 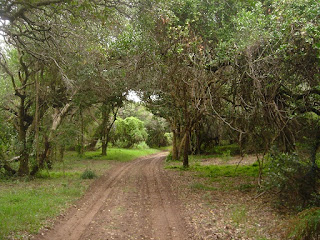 I often drive with the radio on. But this morning, without a choice, I am glad for the silence. A radio presenter's voice, and the adverts, I realize, would just noisily entrench my own culture. Stillness offers me more choice. 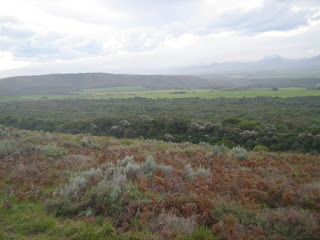 I love travelling through the detail of our land. I love the distinctness of each place. I am very aware, given my work of the last few days, of how each place has, over time, shaped our relationship with it. How the stories of all our associations are printed upon the pages of the ground around me, each one both universal and unique.

And as the world lightens, on my way to the city, I am beguiled by these stories. To my right and slightly behind me, is a somewhat irrelevant rainbow above a small, rounded hill that is catching the sun's first rays.

When driving on unfamiliar highways I tend to alternate between paying diligent attention to the directional sign boards overhead, and ignoring them completely, lost in other thoughts. And so sometimes options rush up at me, their explanations left behind. In a moment of panic, cursing the communication skills of the SA Roads Agency (why can't they also cater for those who don't like long term planning), I am forced to make a snap decision based entirely on intuition. I have learned that this navigation technique, while it may serve me well in the mountains, is completely unsuited to the loopy world of intersecting highways. But I realize too that intuition cannot do worse here, than some hard and fast rule such as: if unsure, stick to the way you're going.

Fortunately the off-ramp I need is one of those to which I am paying attention. It turns me a hundred and eighty degrees, away from the bay and the rising sun, and towards the airport. The rainbow is still there, larger now, wider. Less irrelevant. It stretches above the city, a little to the left of the soccer stadium. A line of low cloud about quarter way up, blurs the distinctions between its colours there. And then higher up the rainbow fades into altitude and over-arching cloud.

In an hour I will board a plane home for Cape Town. I will go from the airport to the hospital to be with my father, for what will turn out to be the last time. He will not be able to talk to me in the voice I have known all my life. I will not be able to understand much of what he says, his mind wandering freely beyond the heaviness of his tongue. But I will hear him say my name, distinctly.

In an hour the humanity around me will be concentrated many times, and packaged, to fly over all of this. I do not yet know what awaits me. I am happy to be down here on a slowly spinning world, adrift amongst the vagaries of sunrises and rainbows. I like the silence, the aloneness, and the certainty of the ground.