Things that go growl in the night 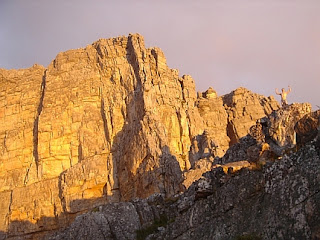 Yellowwood Amphitheatre in the Du Toits Kloof Mountains is a truly captivating, wild and African place. The bivvy spot against its base is a compelling place to sleep. From my bed, the bright stars beyond are entirely framed by a fish bowl of dark rock, that includes the wall, its ridge-lines and the peaks across the valley. The wall, arching hundreds of meters overhead, dominates, both vision and mind. One can fall asleep in this splendid spot with a gratifying mixture of excited anticipation and peace.


Having worked the hardest parts of the upper wall the day before, we are looking forward to a good night's rest, before our attempt at a continual free ascent of our new route the next day. But unfortunately our rest does not last the night.

Around 1 am Rob wakes me. "Listen", he says. It is a beautifully, still and windless night. The high squeaking of bats traversing the wall above, is all that breaks the silence. Until it grunts again. The grunt reverberates around the amphitheatre, so much deeper and louder than I would have imagined. "It sounds big", Rob says. But what is much more alarming than the depth and volume of its growling grunt, is that each series of grunts is coming closer, heading straight and steadily along the base of the amphitheatre directly towards us. This is despite the deliberate noise that we are now making and our torch beams, somewhat ineffectively, probing the dark.

In a situation like this one's rational self could perhaps draw comfort from the theoretically low probability of being chomped by a Cape leopard. If it were to happen in the next few minutes, which my non-rational self is experiencing as a distinct possibility, I would be the first such victim, ever. But unfortunately it is not the rational self that responds most urgently to a fast approaching growl reverberating loudly from the cliffs all around one. Especially in the dark, where rationality has always been much less persuasive. Remember the monsters under the bed as a child? Well picture this: the monsters are growling, very audibly and distinctly. They are without doubt heading out from under the bed straight towards you. And there is no light switch.

A colony of dassies give panicked, high-pitched expression to their terror. Their squeals obliterate all remnants of night time calm. I am considering doing the same. But to Rob, whose rational self seems to be clawing its way to a position of superiority, there is only one course of urgent action required and that is to prove that we are not intimidated. I stumble behind him through the dark tangle of yellowwood trees, half asleep, half terrified of our imminent meeting, wondering how well I will carry off the bluff of non-intimidation. With 40 meters between us the leopard stops in its tracks, its eyes bright in our torch beams. We eye-ball each other. Rob must be bluffing better than me, because it turns and disappears down the slope below. 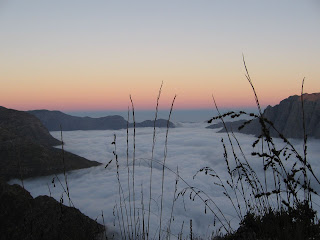 We stand on the edge watching its eyes and listening to the continued, deep sound of its grunts from below. Hearts pounding with a mixture of thrill and fear, we return to our beds where tiredness gets the better of fear, but not for long. At 3 am we are awakened from fitful sleep to play the same game over again.

When our alarms sound too soon afterwards, we are still intact and alive. But it is with far too little sleep that we start up pitch one, at first light. Its harder than I remember it, but its also nicer...

To read the full account of our climb, my love affair with this place, and what happens the next night, see the upcoming June issue of SA Mountain magazine. 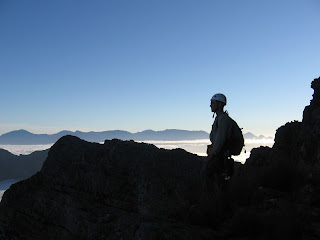