Rim of Africa: starting the journey 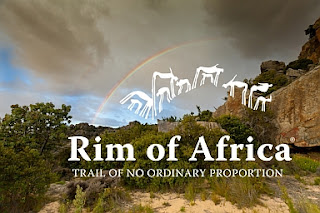 October is Rim of Africa month for me. In October the Cape Fold Mountains are at their best. The daytime temperatures are not yet too hot, the night times no longer too cold, the water flows strongly in each stream and the fynbos is ablaze with its diversity of flower and scent.


Being a trail leader on the Rim of Africa mountain passage is, every year, an extraordinary experience for me and an amazing privilege.
It is a celebration of the incredible beauty of the mountains I love most, the Cederberg, and going south, the Kouebokkeveldberge, Skurweberge, Witzenberge ... It is a chance to get fabulously dirty and stay that way for days on end. It is an embracing of the intense, tight-skinned, tingling warmth of emerging from high mountain rock pools, of cold, black, star-filled nights and warm, blue days. It is a chance to settle into a natural, clock-less rhythm measured only by sunrises, sunsets and star tracks, by passes on the skyline in front of us that become passes behind us, by valleys navigated, rivers crossed. It is a chance not only to experience all this for myself, but to share it, intensely, with others, others whose hearts are also set on fire by being there. And it is a chance for silence.

Each day on trail we walk for a part of it together in silence. In the feedback we get from walkers, this is one of their most valuable and treasured aspects of the trail. Ours is a world that is starved of silence, and it shows. The Rim of Africa is one source of nourishment to satisfy that starvation.

As trail leaders we start these silences, usually with a piece of poetry. And we end them a few hours later with another. This year I led the group into the start at Pakhuis Pass, for some the beginning of a 26 day walk southwards, into that wide landscape of scattered rock. As we walked along the winding donkey track which anticipates the beauty of what I know lies ahead on the journey, a spark of mountain inspiration was lit within me. And as I walked, that spark became a poem, scribbled into my red moleskine book while walking through that magical land. And when the silence was ready to end, my poem too, was ready.

During each silence that I led in the days that followed, I wrote a poem as I walked, and read it to the group to end.

For the next few days on my blog, I will post these poems that I wrote in the silent times. But first there is the start.

It has become a Rim of Africa tradition that the walkers are led into their journey and their first silence of the trail, with part of a poem that I wrote several years ago for my godson, Matthew. On the 2nd of October this year, 15 of us gathered a little way up the donkey track. We filled our water at the little stream that crosses it there. I held Ivan's trusty staff in my hand, newly tied with 15 pieces of red cord, binding each of our hopes and intentions into a shared journey. I remembered the time a few years back when we almost lost the staff, crossing the Olifants River. Ivan leapt into the water in his clothes to retrieve it as it disappeared down a rapid. It was precious to him, far more precious than keeping dry. Now I hold it proudly and I voice these lines into the stillness once again:

I don't know what weight and depth and solidity the earth,
the soil, the rocks, the mountains,
will impart on you.
I know only that they will.

I don't know what flow and movement and shape the waters,
oozing from the earth, bubbling in streams, tumbling from waterfalls
and crashing on the shore,
will share with you.
I know only that they will.

I don't know what songs of airy flight the winds,
sometimes howling, sometimes whispering gently,
will inspire in you.
I know only that they will.

I don't know what higher thoughts and frequencies and visions
the sun's yellow heat will burn into you,
and by its absence in the night,
let smoulder in your darkness.
I know only that it will.
Posted by Johann Lanz at 11:10 PM