This morning, I suppose, was a fairly ordinary morning in the life of a parent, filled as it was with the usual ups and downs, and a little magic. Sebastian had been left at home once, so far. The squabbling over whose turn it was for the front seat, which had already delayed teeth brushing and final departures, was not yet resolved by the time I was trying to get Mila and Karl strapped into the car. That elusive even-keeledness with which we, as parents, aspire to ride the choppy seas of our children's emotions, was by now being buffeted amongst fierce white horses, far from shore. "Right", I shouted at Sebastian, "If you are not happy with where you need to sit, then you can get out and stay here."

Sebastian always rises to these challenges, with a certain passive aggression. "OK", he said with a sulky and unspoken, "I'll show you." And so off we sped, accelerating rapidly down the tar road and out of his sight. By then I was driving on pure reactivity, and found, I have to admit, some satisfaction in thinking how this ought to teach him. It is heart warming, though, how one sibling always sticks up for the other, if they feel that unfair treatment is being meted out. Phoebe breathed a loud sigh of relief when I finally conceded and turned around.

I find Sebastian sitting with Zed on the stoep. In this short time, he seems to have perfected Zed's forlorn, you've-left-me-at-home-again expression. "Now jump in", I say cheerfully, trying to diffuse the situation. But by the time we stop down the road, now very late, to load in Olivia, he is threatening to jump out again. We have forgotten that today is teacher Lindy's birthday. Mila has decorated a glass jar as a gift. Sebastian has nothing. He is distraught. I am irritated.

Eventually I am able to connect, beyond my irritation, to his disappointment, and I think, "Why not take up his suggestion, to stop and buy flowers. We are late already, anyway." I feel hassled buying flowers in a shop where I would not normally buy flowers. I am conscious of price. Sebastian likes these - the most expensive. I worry, as I always do, about our world's relationship between price and value. I dither. "How about these ones?" But his only criteria is the beauty of the gift. It must be worthy of teacher. 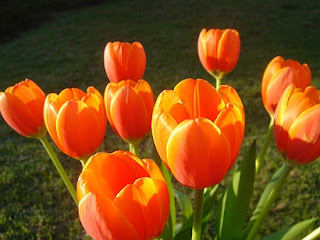 Sebastian is happy now, cradling with great care, a beautiful bunch of pastel, orange-pink, unopened tulips in the back seat. "Hey", he says, with no concern about price, "I can pay for these with my own pocket money." I am proud and humbled by his generosity, and perhaps he offers me a glimpse of another way to view my discomfort around our world's perception of value and price.

Further down the road there is chaos in the early morning traffic. An old man stands in his dressing gown and slippers on the pavement. His uneven, stubbly beard is pure white. He looks lost, out of place here in front of an old, simple, wire gate and unfashionable, low brick wall, flanked on each side by houses that were once like his, but that have since been demolished and re-built. Clean, modern aesthetics of glass and cladded stone. High, efficient security walls. He holds out a bowl of dog food, tilted forward pathetically and helplessly. In front of him, two dogs weave wildly through the traffic with uncontrolled exuberance at their freedom. Cars screech to a halt. Traffic begins to back up at the 4-way intersection.

Instinctively I pull over and get out. Perhaps I picture my father, if he could walk, getting into just such a situation, swearing helplessly while the dogs and life, enthralled in their mad dash forwards, ignore him. But when I reach him, the old man is surprisingly unperturbed. In fact he chats convivially, telling me how the brown dog bit his friend the other day. "But of course it wasn't the dog's fault. I had her spayed", he tells me, "but it hasn't helped."

I now notice that the brown dog, clearly the main instigator of the two, is frothing at the mouth and dashing at pedestrians, barking threateningly. The early morning pedestrian traffic, of domestics and gardeners, through this upmarket neighbourhood, is also beginning to back up at the intersection. There is general reluctance to pass through any part of the zone circumscribed by the dog's mad dashes. I am no longer so convinced of the dog's blamelessness in the friend biting incident. It has no collar. When I try to approach it, it directs its bared teeth at my legs, and then makes a similarly mad, excited dash at Sebastian, who has come to help me. The other children peer anxiously from the car windows. Phoebe clings to the flowers.

The old man continues to wave the food bowl in lame offering, while telling me a story about a previous dog he had. I can't really understand the relevance of this story right now, but then in the chaos I don't quite catch it all. I begin to think that perhaps I cannot be of much assistance here. He is extremely grateful, though, for our support and my offer of good luck as we depart. Quite cheerfully, he says that he thinks he might need it.

Back on the road, the children notice the time on the car's clock. "We are going to be very late", they observe. And then after they have thought about it a bit they add, "But that's OK, because we bought flowers for teacher and we helped an old man." I am impressed how easily they value kindness over the often seemingly more urgent of life's priorities, in which we adults tend to get caught up.

Now that the window is closed because Sebastian is happy and no longer wants to jump out, the car warms. "Hey, look!" he says after a while. "The flowers are opening!" And indeed they are. Slowly, cautiously, but purposely, before our eyes. "It's magic! It's magic!" the children whisper together, in hushed awe. And I have to agree. It is magic: this delicately offered gift of exquisite beauty in the depth of each flower's hidden centre.

There is a moment, late on each morning's journey to school, that we turn into the farm, and cruise down the hill towards the school and the sun, rising over receding rows of dark mountain ranges behind. Often the rising light combines and swirls upwards with the clouds, spectacularly. Sometimes it glints pure white, off the distant snow on the back of Du Toits Peak. This moment is always one of those sacred pauses, a pause that so valuably punctuates my day with the realization of what, exactly, life offers us. 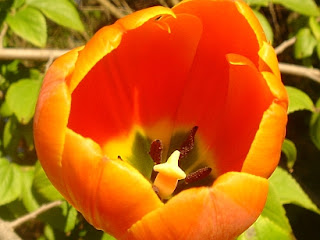