It was not the picture that I had held in my imagination. Perhaps overly influenced by photos of Dean Potter solo high-lining above Yosemite, the picture I held had me looking cool, thrillingly poised, yet in control and making delicately deliberate progress across the line to the other side. Orange cliffs behind me, black water below.

I'd been slacklining only about three months. From the moment I was first introduced to it, in a Banff festival film, I knew I wanted to step onto the line to feel the taught and delicate balancing sway of the tape under my bare feet, and to experience that beautiful coming together in movement, of body and mind.
And I walked with growing enthusiasm and confidence, increasingly longer lines a few feet above the soft, green grass of my lawn. I was hooked. But it was the beauty of a high line that really appealed, and I wanted more. And the picture began to form. Fortunately Warren's experience, through a forum exchange, brought a much needed reality check and convinced me to hold on the high line for a while. But still, I had over twenty years of trad climbing experience behind me and so thought things might be different for me. I came up with a compromise – a line above water – the glorious freedom of a solo, without the danger. The beautiful, big rock pool of Maalgat, in the Cederberg, formed the perfect background to the picture in my mind. 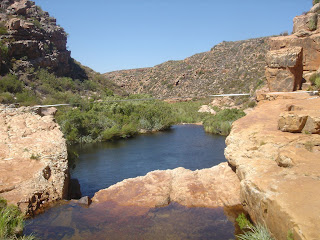 But there were a few things that three months in my front garden hadn't yet taught me about slacklining. And despite Warren's counsel I needed more direct experience to convince me of the very significant and direct effect on one's performance, of being out of reach of a comfortable step-off when one needed it.

The Cederberg is my favourite place in all the world. The day before going down to Maalgat I had on-sighted Old Timer's Disease – one of Wolfberg's stunningly classic trad lines, with a beautifully committing crux, opened by that legend of Cape climbing, David Davies. I was elated by the place and the possibilities and I was feeling confident. Arriving eagerly at Maalgat, I immediately began the set-up, in what seemed like the obvious place: the place high above the water, that fulfilled that picture in my mind.

It was an unsettled day with the north westerly bringing in the high, streaming cirrus of an approaching storm. By the time I was finished the set-up, the tight line was taking the brunt of it and vibrating noisily over two feet or more in the middle. Even with most of my weight on the line, it continued to flap. For the first time I had my doubts about that picture in my mind. The cold, gusting wind down the kloof seemed suddenly now to offer a good excuse not to walk. But after all the effort of the set-up, and the anticipation, I had to do it. 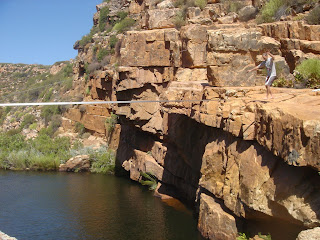 The way I had set it, the line ran a foot or two above a nice broad ledge, offering an easy step-off opt-out over the first 3 meters - a good space in which to get a feel for the vibrating line before committing to the crossing. I stepped onto it and despite its movement, I felt good. I could walk easily and confidently along above the ledge. But the ledge ended abruptly. At its edge was a 4 meter drop to the dark water below. And it was only in approaching the edge that I became acutely aware, for the first time, of the implications of my height above the water. A nice controlled jump off the solidity of the ledge is very different, I realised, to a flailing fall from a wildly wobbling line, and the chances of a successful cat manoeuvre in the few seconds one has before hitting the water, it turns out, are very thin. My desperate attempts to do it did nothing to soften the solid blow that the water dealt to my flapping, prostrate body.

Walking those first few meters of the line above the ledge, two things were hammered home to me: how powerfully the mind creates edges over which it is difficult to step, and how faithfully any wobble in the mind is reflected in the precarious line on which we balance. That abrupt edge had become hard-set in my mind as an impassable barrier. I could walk confidently towards it, but I simply couldn't make the next step across it. Not from any physical change in the line at that point, but because of what that point had now become in my mind.

Afterwards I reflected on what made that edge different to other edges I had crossed more easily – the delicately committing reach above the slightly marginal pegs to an unseen hold around the arête on Old Timer's. 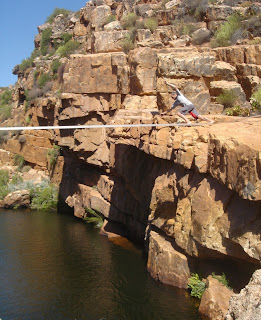 And I concluded with some satisfaction, rather than disappointment at my slacklining failure, that it was experience that made the difference. It is gratifying that the spent years of passion for crossing edges like on Old Timer's, had taught me a lot about how to do it. For this challenge of a different kind of edge at Maalgat, there was lots more to learn, before returning.

After several attempts, stepping off each time at the last moment, I decided to force myself to take the next step. On the first try I rapidly reversed the decision, making an awkward and dangerous jump back to the safety of the ledge. But on the second, my fate of a thoroughly humbling experience, rather than that picture I had imagined, was sealed, for that edge was set too fast in my mind and I knew that if I crossed it now, I would fall. 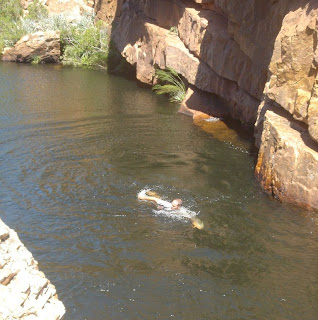